Summary: In 2015 alone, the world witnessed the highest ever recorded number of displaced populations. Women and children accounted for nearly two-thirds of all refugees and migrants arriving in Europe. Stripped of the protection of their home, their families and community, women and children were particularly vulnerable. Throughout the migration path, women and girls were highly exposed to risks, experienced multiple forms of violence and faced different types of barriers in accessing health care and exercising their sexual and reproductive rights. These challenges prevailed at every stage of their journey, including on European soil. EuroNGOs convened a workshop last June on the importance of advocating for a sexual and reproductive health and rights (SRHR) response in crisis settings. This side event was aimed at continuing the conversation, highlighting the SRHR challenges that women and girls faced when migrating to Europe and identifying ways to advocate for an effective and comprehensive access to SRHR in humanitarian settings in general, and in the context of Europe specifically.

Presentations:  Shirin Heidari, Director of RHM journal, opened the session by drawing attention to the urgency of addressing the SRHR needs of women and girls in humanitarian settings. Women and girls were affected disproportionately. They faced unique challenges in conflict and humanitarian crises, among others, heightened risks of violence, but also during migration and upon arrival in host countries. Furthermore, factors such as lack of knowledge of the local language, discrimination, fear of authorities and deportation, all prevented women and girls from accessing or made them reluctant to seek sexual and reproductive health (SRH) services in these special circumstances. Heidari emphasised that not addressing the SRHR of this vulnerable population was a recipe for failure of the sustainable development goals, which committed to leaving no-one behind. She noted that while there had been recent initiatives at an international level – the Abu Dhabi Declaration, For Every woman, Every child, Everywhere; the World Humanitarian Summit in Istanbul; the Summit for Migrants and Refugees — which increasingly committed to providing SRH services and responding to gender-based violence (GBV) in humanitarian settings, these commitments were by no means comprehensive. She called on partners to keep up the pressure and advocate for a comprehensive and inclusive SRHR response that did not leave out crucial services such as, safe abortion or leave behind marginalised people, such as lesbian, gay, bisexual, transgender and intersex (LGBTI) persons. She concluded by calling for the collection of sex-disaggregated data and gender-sensitive indicators, as reliable evidence was critical for understanding the extent and nature of challenges, shaping policy and knowing what worked when scaling up public health interventions. She announced that RHM was dedicating a special issue in 2017 to the subject.

She then welcomed Glory Osarhiemen, who had had extensive experience working with refugees in Italy. Osarhiemen, who herself emigrated from Nigeria to Europe, shared a personal story. Before recounting the challenges and risks women faced when they embarked on their journey from Nigeria to Italy, she highlighted the fact that most women travelled with dependents. Hardships and privations during the journey often obliged them to engage in transactional sex in exchange for basic needs such as “a cup of water”, food, or simply securing their passage on a boat to Europe. Moreover, rapes were routinely committed by smugglers. However, the risks of violence and other hardships, continued to exist on European soil. She relayed the story of a migrant woman pregnant as a result of rape, and how the local abortion providers could not offer her an abortion because of her status as an “undocumented” migrant, obliging her to continue an unwanted pregnancy to term. Osarhiemen challenged the audience: “Don’t just listen to their stories. Work on them!”

Following Osarhiemen’s powerful presentation, Sandra Krause, Reproductive Health Program Director at Women’s Refugee Commission, reiterated the increased risks of GBV, when families were disrupted and civil society broke down as happened in a crisis situation. In such cases, a prior assessment was unnecessary as women’s and girls’ needs were so foreseeable. She explained that the Minimal Initial Service Package (MISP) was designed to respond to these needs through a coordinated set of priority activities to prevent and manage the consequences of sexual violence; plan for reproductive health services; prevent excess maternal and newborn morbidity and mortality; reduce HIV transmission; and plan for reproductive health services for marginalised groups such as people living with disabilities and LGBTI populations. Krause highlighted that, despite prior knowledge and figures pointing to high maternal (60%) and under-five mortality rates (53%) in crisis areas, the funding they received was still less than half that received in non-conflict situations.

Celia Varela Dueñas, a midwife at Médecins du Monde in Greece, said non-governmental organisations working inside camps in Greece required the support and assistance of local health services. However, access to these services remained a major obstacle for women seeking SRH services as they faced basic barriers such as language and logistics. Further complications arose when more sensitive issues needed to be addressed, such as emergency contraception and abortion which, despite being legal in Greece, were difficult to access in most instances. Family planning, Varela Dueñas  emphasised, was not considered a critical health priority at the beginning of the crisis, although she said that this was slowly changing. 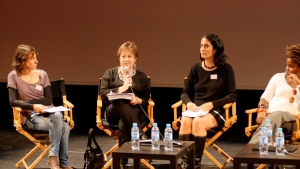 Carmen Miguel Juan, Regional Legal Director from Women’s Link International presented the general findings from extensive field missions the organisation carried out in Greece and Turkey, and published in a report, “Trapped in Europe: dignity denied”. The report revealed a lack of safety for women in the camps and the unmet needs of pregnant women, babies, and children. This evidence enabled them to file a complaint with the European Ombudsman pointing to the human rights violations that were a result of the EU-Turkey agreement signed earlier this year. The agreement underlined how the EU failed to: 1) carry out a human rights impact assessment with a gender perspective and, 2) take into consideration the promotion and protection of children’s rights. Christina Zampas drew the audience’s attention to this as the first example of a complaint filed with the European Ombudsman that called on the EU’s responsibility to adopt a gender perspective in its assessment and to promote sexual and reproductive health and rights.

Key messages from the panel discussion: