MY experience of the Together For Yes (TFY) campaign

Written by Emma Campbell: Artist, activist, lapsed academic and Abortion Nerd®, all of which she throws into her role as Co-Chair for Alliance for Choice. Learning from previous generations of feminist artists and activists, she illuminates the structural inequalities that face abortion seekers and activists through education, art, campaigning and disruption. 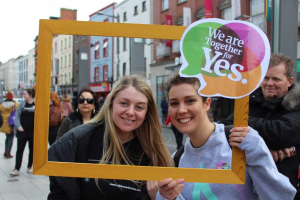 The 25th of May 2018 seems like a lifetime ago. After an intense period of canvassing, social media, fundraising, media interviews, evidence-gathering, meetings upon meetings and workshops galore, suddenly the day was upon us when we could do no more. Even now, typing this, I’m welling up with tears, so overwhelming was the news that Ireland had voted for abortion seekers finally to be treated with respect and dignity, by repealing the 8th Amendment of its Constitution.

On that final day, a few other dedicated activists and I had stood at the train and bus routes from Belfast to Dublin, canvassing anyone we thought might be on their way #HometoVote. Later that evening, we were surrounded by REPEAL and #trustwomen jumpers in the BBC6 music Belfast crowd, with polls coming in telling of a landslide victory.  Yet, we still couldn’t let ourselves believe it was true.

The cheers from the huge enthusiastic crowds in Dublin were poo-pooed by some as being uncouth. This echoed a host of paternalistic and unwelcome advice from every corner in the lead-up to the referendum. We had been told that our demands were “too extreme,” that we were “too shrill” and that we were “doing our campaign damage” by refusing to be even more conciliatory to some illusory (and now we see entirely fictional) pearl-clutching middle ground. Regardless, the crowd celebrated and let the world know that the North was Next!

This was a long way from the Ireland we began campaigning in. This even felt different from the Monaghan and Cavan and Donegal we canvassed in only a few weeks earlier. Many of us wondered afterwards whether the resistance we met on the doorsteps in those areas was more redolent of a performative type of moralism than it was of the real views of the inhabitants. Was Ireland pretending to be less pro-choice than it actually was that whole time?

The exit polls revealed that this may well have been the case. The most cited reason for voting yes was given as the woman’s right to choose: “More than 75% said they had not changed their mind on abortion in the past five years, suggesting their support for reform far predated the announcement of a referendum some months earlier. Some 82% said they had not changed their mind on how they were going to vote during the campaign. More than three-quarters said they were influenced by personal stories they heard in the media or by people they knew. Only 10% said they were influenced by the poster campaigns and only one in 10 cited religion as a motivating factor.”[i]

It’s clear that sharing the testimonies of women and pregnant people was the most significant way of garnering support. Yet, we must also reflect on the fact that the reliving of personal traumas in order to evoke the empathy of voters has taken an enormous toll on many. Some lost friends, or relationships with relatives. Others who have still felt unable or unwilling to disclose their own abortion experiences have felt unnecessary guilt. There are few other medical procedures so laden with moral judgements and charges of personal responsibility.  In Ireland, through this campaign, women and LGBTQ+ people have once again paid the cost of the emotional labour required for a society to evolve.

We also learned that debates and media articles during the campaign did not reflect “balanced” journalism. While the content of many contemporary news outlets continues to demonstrate the contrary, balance is not about positing two opposing sides against each other and encouraging the most incendiary comments. Rather, balance is about ensuring that the range of opinions presented reflects the range of opinions of the public.

Upon reflection, many of us now believe that within the campaign, there was too much acquiescence to conservatism. This has cost Irish women more than restrictions on what they can say about abortion. It means that a 72-hour waiting period will likely be introduced despite being medically unnecessary. It also means that after 12 weeks gestation, many Irish women will still need to travel to the UK to obtain a safe abortion. Instead of getting the best law we could, we got only what we asked for, which was already too much of a compromise for some long-time activists.

Nonetheless, we did many things well. These included the all-island approach, the incredible energy and enthusiasm of small regional groups, the roadshows, comedy shows, art shows, club nights, bake sales, and lucky dips. So astounding was the public support shown by the poster crowdfunding campaign that it smashed its target ten times over.

In some of the more despondent moments – when yet another door was closed in an activist’s face, or one more man told us things they barely understood about pregnancy and women’s bodies, when it all felt like banging your head on a brick wall — that was when we tried to lift each other up the most. That’s when we said, “Okay, yes, this neighbourhood seems closed to us, but we know someone has travelled from this street.”

Someone helped them find the money, or maybe minded their children. Maybe someone covered their shift at work or got their cousin, the travel agent, to help with booking cheap airfares. Maybe one of them ordered the pills on her credit card because her friend didn’t have one or made tea when her sister was taking the tablets. Maybe someone else was emailing all the airlines to see which one would transport foetal remains. Maybe another person remembers the girl at school everyone whispered about and no-one put their arm around. Perhaps one of them travelled with her daughter to Birmingham or dropped their friend off to the ferry port and slipped some money in her pocket for some breakfast. The point is, as the indubitable Mara Clarke says, “It takes a village to have an abortion” for women in the island of Ireland. No legal access means you’ve got to involve friends and strangers.

We knew that everyone knew or loved someone who had had an abortion. That’s really what kept us going. We knew in our bones that one great big collective secret was slowly having the pressure released. Thankfully our dreams were realised and the Irish people stepped up to the mark. Hopefully soon, the British Government will do Northern Ireland the same courtesy and grant us the right to control our own bodies.

Alliance for Choice in Belfast and in Derry is a grassroots organisation dedicated to fighting for free, safe and legal abortion accessible locally for women in Northern Ireland. We have been a sister group of the anarcho-feminist Abortion Rights Campaign in the Republic of Ireland since its inception and we are members of the Coalition to Repeal the 8th, an umbrella group of organisations all in the same struggle in Ireland.

Please note that blog posts are not peer-reviewed and do not necessarily reflect the views of RHM as an organisation.