Meet the Midwife: An interview by Ruby Irene Pratka with Mesayi Truye, Ethiopia

This interview was conducted by Ruby Irene Pratka, a freelance journalist currently working with Cuso International as a volunteer communications advisor for the Midwives Save Lives (MSL) project in Africa. MSL, a four-year initiative in Benin, Democratic Republic of the Congo, Ethiopia and Tanzania led by Cuso International in partnership with the Canadian Association of Midwives (CAM) and local midwifery associations, is contributing to the reduction of maternal and newborn mortality by improving the supply and demand of health services and strengthening the work of midwives’ associations. MSL is funded by the Government of Canada through Global Affairs Canada.

Meet the Midwife: An interview by Ruby Irene Pratka with Mesayi Truye, Ethiopia 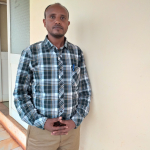 Every night as he turns out the lights, Mesayi Truye’s responsibilities weigh on him.

“My parents are from a rural area and didn’t know the difference between a midwife and a nurse,” he says. “When my mother found out what I was doing, she said, ‘You are working with two lives instead of one — the mother and the child. You have to be conscious of that.’ Now she prays that every mother and fetus will stay safe in my hands.”

As a midwife, Mesayi takes his mother’s message deeply to heart. “I don’t really sleep if I think someone might be calling for me,” he says. “If you miss a few minutes, you can miss a critical moment for the fetus. Imagine if the mother has been carrying the fetus in her womb for nine months and loses it because we weren’t paying attention. It will hurt not only the fetus but the mother, her partner, their family and the entire community.”

Mesayi works in Homosha, a tiny remote town close to the Ethiopia-Sudan border. With a master’s degree in integrated emergency surgery and more than 15 years of experience as a midwife and public health officer, Mesayi trains other midwives in Basic Emergency Obstetric and Newborn Care (BEmONC), as part of a program implemented by Cuso International’s Midwives Save Lives, in partnership with the Canadian Association of Midwives, Ethiopian Midwives’ Association and Ethiopia’s federal ministry of health. 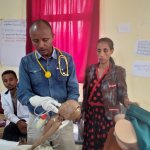 “If you’re in Addis Ababa or Bahir Dar or Makale, there are all kinds of specialists—surgeons, gynecologists, obstetricians and outpatient specialists,” says Mesayi. “But in Homosha, we’re about 700 kilometres from the nearest large city. In the past we had a lot of mothers who died due to complications from labour and delivery.”

He’s haunted by one case in particular. He could do nothing as a woman in labour bled to death because the regional hospital had no blood bank. “That woman is still inside my brain,” he says. The hospital finally received a blood bank five years after the woman’s death, but lack of access to equipment and training still limit midwives’ ability to do their jobs, says Mesayi.

“I admire Cuso International because you’re facilitating capacity building and helping to fill the gaps in skills that some of our midwives have, through the BEmONC training,” he says. As an instructor, he emphasizes the management of postpartum hemorrhage, like the one that killed his patient. Although the condition kills tens of thousands of women around the world every year, it can almost always be treated with skilled care, timely access to drugs and, if necessary, blood transfusions.

“You will lose the woman in two hours if you don’t know how to manage this,” says Mesayi. “If we give the right care to the mother, she will survive every time. No one has died from this condition in my hospital in the past three and a half years.”

The blood bank, emergency surgery program and BEmONC training have all contributed to reducing mortality rates in the region, he says. And Mesayi is ensuring more midwives—and the mothers and babies they care for—benefit.

“Keep in mind that you are working for human beings, not for a salary. Keep learning and keep upgrading your skills all the time,” he says. “I like two things: clinical work and teaching. Teaching is like life—you lecture, you explain and then you work on the practical area. You work with so many nurses and midwives who are the future.”