Malta’s medical doctors: No to total ban on abortion

Contrary to the long-held general perception that most doctors in Malta support the current legislation, the SRHM study, Abortion and methods of reproductive planning: the views of Malta’s medical doctor cohort, provides evidence that this is not the case

“‘Abortion and methods of reproductive planning: the views of Malta’s medical doctor cohort’, a study which surveyed 454 doctors, has recently been published in Sexual and Reproductive Health Matters Journal. All contacts that were accessible with permission from the Malta medical council (1,578 out of a total of 2,468 registered doctors) were invited for the survey.

According to the surveyed respondents, the majority of doctors in Malta do not agree with a total ban on abortion. Doctors were questioned about their views on legalisation of abortion in different circumstances and gestational ages. A clear majority were in favour of legalisation, for at least up to 12 weeks gestation, in case of ‘woman’s life in danger’ (66.8%) and ‘non-viable fetal anomaly’ (63.0%). These two circumstances also gained a narrow majority in favour of abortion being legal at all stages in the pregnancy, at 54.2% and 50.2% respectively. 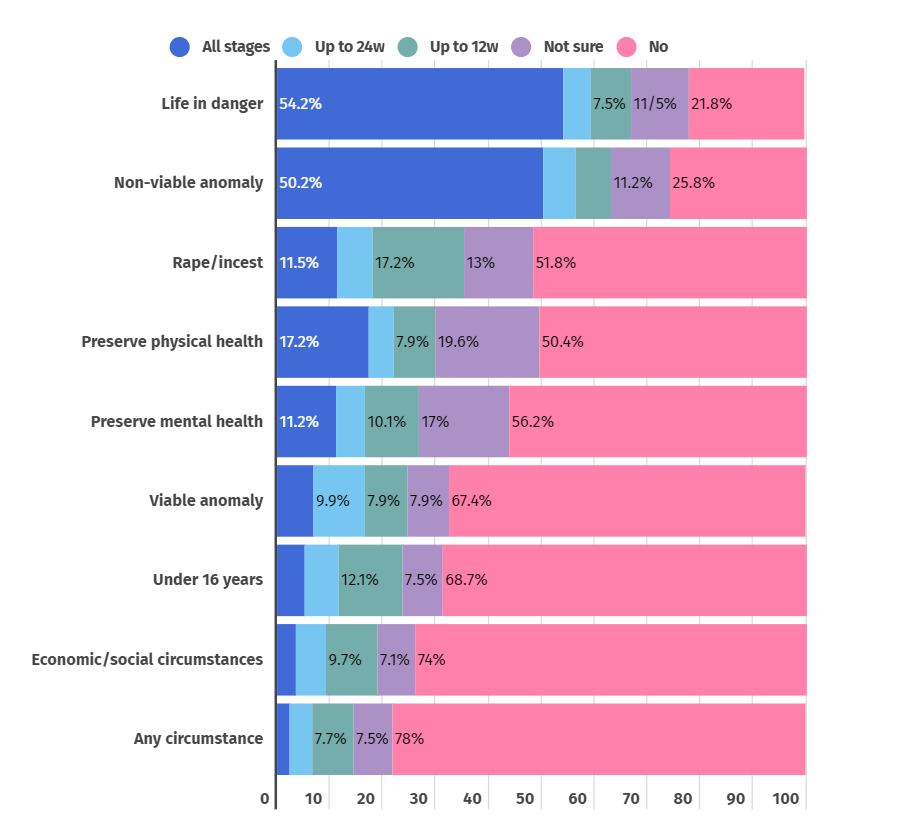 The other circumstances did not have a majority in favour of legalisation, but still gathered variable degrees of support. Only a narrow majority was against the legalisation of abortion to preserve physical health and in case of rape or incest, at 50.4% and 51.8% respectively. Abortion to preserve mental health, in case of viable fetal anomaly, in underage pregnancy, and for economic or social circumstances gathered greater opposition.

Contrary to the long-held general perception that most doctors in Malta support the current legislation, this study provides evidence that this is not the case. In fact, there were doctors within each of the most relevant specialities (obstetrics and gynaecology, general practice, psychiatry, paediatrics, and public health) who agreed with its legalisation, at least in certain circumstances. Unfortunately, there was still a considerable percentage of doctors who opposed legalisation of abortion, even in critical situations such as when a woman’s life is in danger (for which 21.8% were against legalisation).

Results also show that older and/or religious doctors were in greater disagreement with the legalisation of abortion and with all the other methods of reproductive planning questioned, when compared with younger and/or non-religious doctors. The fact that young generations are more supportive of reproductive healthcare, as proposed by leading health organisations, and that Malta is becoming more secular, favours a future where many more will support access to abortion. Since this survey was carried out before Doctors for Choice, Voice for Choice, and Abortion Support Network launched in Malta, the results should serve as a baseline for future studies to assess whether socio-political changes and organised campaigns are creating a shift in the views of Malta’s medical doctors.

Matters of human rights and essential healthcare should not be decided by any majority. A pregnant person must have access to safe abortion irrespective of the views of different population groups.

However, the views of medical doctors on this issue remain important since the complete ban on abortion impacts the relationship, advice, and care that patients receive from their doctors. Recent developments and our findings suggest that Malta will become more accepting of abortion as part of comprehensive reproductive healthcare, although not without resistance. It will take time to deconstruct the false sense of security created by centuries of political, religious, and cultural indoctrination against abortion, and simultaneously build a foundation of understanding on this procedure truly based in healthcare, empathy, and respect for one another’s choices”.