Authors of the paper titled A qualitative exploration of the salience of MTV-Shuga, an edutainment programme, and adolescents’ engagement with sexual and reproductive health information in rural KwaZulu-Natal, South Africa examine the extent to which an edutainment programme, MTV-Shuga, was reported to influence young people’s engagement with sexual and reproductive health (SRH) information in rural KwaZulu-Natal, South Africa. Their findings highlight the importance of enabling young people in rural areas to watch MTV Shuga with peers in a safe space in which discussion of the content is facilitated. The authors also argued that there is also value in encouraging parents to watch MTV Shuga as a means of enabling discussions between children and adults in their lives about SRH matters.

THE BELOW IS TAKEN FROM COVERAGE IN NEWS24

According to Funeka Mthembu, project manager at The Aurum Institute’s Rustenburg clinical research site, while there are programmes and policies in place to help promote adolescent and youth-friendly services, there are still gaps.

Mthembu says knowledge about sexual and reproductive health and available services is still a challenge.

“According to the SA National HIV Prevalence, Incidence, Behaviour and Communication Survey (2017), only 36.1% of youth between 15 and 24 years had accurate knowledge of HIV transmission. Another study conducted in the Northern Cape among high school pupils found that pupils had 70% knowledge on STIs and only 12% on HIV and Aids. A study conducted in Eastern Cape among 15 to 24-year-olds found that 15.33% of youth did not know what STIs were,” she says. 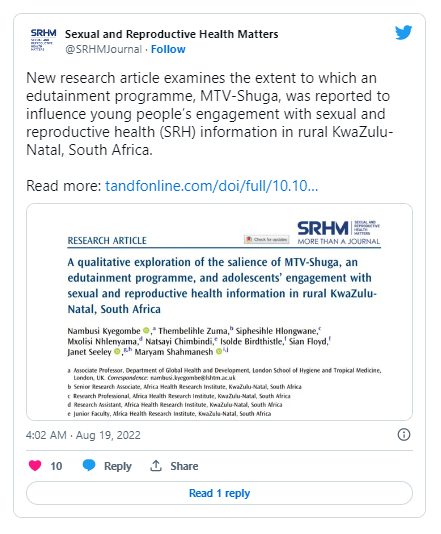